).  Hmph, I obviously should’ve edited that before copying it.  Oh well.

Well, it’s a cute story that takes that portion of Huck Finn, and makes it into an easy reader.

I thought this was a perfect opportunity to work on elements of story.

I found a great book about the The Gateway Arch

.  It had all the information about it, but it wasn’t too overwhelming.

After reading it we took some time to talk about what kind of monument we might design.  Can you guess what the boys wanted to design?

Yes, we got one that looks like the Washington Monument, one birthday cake, and then two battle scenes.  Actually, I think Batman’s is a whole epic war complete with hide-outs.

I kid you not.  Either way, the kids all enjoyed it, so I’m not going to complain too much. 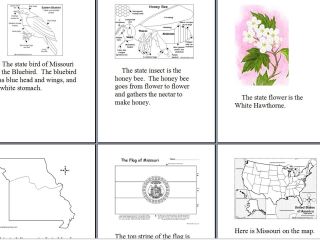 So we learned about Missouri this week.

I went to Enchanted Learning, which is a great site by the way and got the pictures for the different state symbols. I need to check and see if Microsoft has any to use, because then I’ll be sure I’m not violating any copyright infringement. I don’t think I am since I’m saying where I got it from, and I’m not selling it.

Just to let you know what all we did with this. We colored the state of Missouri, then on the map of the U.S. we colored where Texas was on the map and Missouri.

We colored the flag. I don’t think ours would pass muster. They were more excited about the idea of coloring than about actually looking like the flag. And I apologize to the state of Missouri for the way that Princess colored your flag. It has nothing to do with her views on the state, she really enjoyed our drive through the state and going to some of the state. Ummm….. She’s just enthusiastic.

O-Mite had fun looking over Superman’s shoulder as he colored. He hadn’t known before that the state bird was a bluebird. Unless Princess colors it, in which case it’s pink, with just a little blue. And as always I had to fight to get them to color with another color other than their favorite.

The station is an amazing work of art just to look at it. There’s lot of little shops that we didn’t get to look at, which was kind of disappointing because they looked to have some unique flair to it.

To get to the kid’s museum you go down an escalator, which my kids still freak out at. Then walk for a long time past all sorts of fun stuff to look at. THen you get inside and it is SO COOL!

To learn abou the laws of motion you play mini-golf!

Which come to think about it, was probably one of the first times we’ve gone put-putting. That is somewhat shocking all by itself because I love mini-golf. I don’t like real golf, but that’s another story.

My kids are absolutely enthralled by reptiles. I could truthfully expand that out to any small animal. I think in the very near future the fight over pets will become serious.

Heading into the dinosaur dig area, this really freaked Princess out. But, I thought it was pretty cool.

Once in there you had lots of different paint brushes to choose from to unbury the dinosaur bones. You could also make rubbings of different dinosaurs. My kids still don’t have the dexterity to really get the rubbings done.

Jeff and I had a lot of fun with this optical illusion area. Here we’re in a room that’s upside down and has all sorts of weird things about it. The kids mainly had fun running from room to room in there.

They were mostly patient waiting in line to drive the helicopter. Isn’t it funny how those are ALWAYS the most popular part of things to ride in the big cars and planes and things they see all the time but can’t go in.

This was especially intriguing to them because we had just narrowly missed a tornado the day before!

So, they had this crime solving area, which could have been really cool to older kids, but a few of the exhibits weren’t working quite right. You were trying to find the missing cow. After they heard this our kids spent the next 15 minutes running around the museum trying to find the cow. “Mommy, where’s the cow?” “Why can’t I find the cow!?!” That was not the wisest decision on our parts, oh well.

Again we only left because it was closing time, so we headed over to what was a bit fancier of a restaurant than we intended to go to, but it was REALLY good food, and a lot of it. So, it was probably worth it. We got in a couple more hours of driving that night, which meant we only had 3 hours of driving for the next day. So all was good.

One way we’re avoiding buying too many random souveniers by getting postcards. THe boys found ones of Union Station in St. Louis and so we decided to make our stop for lunch that day there.

They had lots of fun splashing in the fountain.

Batman and Princess splashing. It was amazing how they found the one puddle next to the fountain and splashed like crazy.

Union Station has been transformed into a very cool mall and museum. The great thing is it’s free! We had a blast looking at the model trains.

Then we went by the coin rides and had fun pretending to drive helicopters and such stuff.

I’m gonna try to post a quick reply to the Summer Picnic Question next. I’m so glad to have my laptop back and access to the internet.