As I mentioned (I think, I know I did over at ABC & 123), we’re restarting our state studies with 2 other families, but I wanted to finish up posting about what we’ve done so far, before restarting it all.

This time we’re going in order of the states entering the Union.  So, on Wednesday (which will be yesterday for you guys, if I schedule this for Thursday), we’ll have studied Delaware.  And the week after that we’ll be learning about Pennsylvania.

However, back to Kansas:

Here’s what you see:

On the left: meadowlark, buffalo

On the right hand side: sunflower paintings

Twisted Tale (in the pocket are the illustrations)

And on the bottom is the life cycle of a sunflower, which dovetailed nicely with this math activity.

Other things we did, but aren’t in the book:

watched Wizard of Oz, I was going to make puppets for it, but opted not to.

And that’s our Kansas study……..

Right about the time I started planning our Kansas unit I saw this really cool idea over at Sewing School.  In her version she supplied them with lots and lots of different building materials.  But, that would be one of the differences between a public school (by the way wouldn’t you love her as your teacher?), and homeschooling.  That or I didn’t want to search for different building materials.  I knew Legos would stand up……..

So, after reading all of our fun tornado books I set them out with toothpicks and large numbers of mini marshmallows to design a tornado proof house.

Finally I declared an end after 10 minutes.

And then the mean old tornado (or hair dryer, might as well get used for something) came in and tried to blow over their houses.

And then came the best part of all, eating the evidence.

Except for Batman, who continued building, and then got his brother and sister in on the fun.

Only until they realized he was not intending to eat his house.  Instead he got out toys and started to play with them and the bad guys were attacking and it was a major battle going on for the marshmallow house.

Can you see the epic battle going on there?

That did require larger font, and now I can’t get the rest to go back to normal.  Okay, I really could, but it’s not a choice on the drop down menu and I don’t want to type it in.  So, you’ll have to live with .5 bigger than the rest for this ending paragraph.

And, I think that ends what I have to report for our Kansas studies.  I’ll write a wrap-up post for later this week.

I can’t wait to see everyone’s science posts.  I love going to see all of them (eventually, it sometimes takes me a week or two to read all of them).

Okay, actually it’s just one tornado book, and this is one of about 4 posts about tornadoes.  Really, we found that many awesome books about them.
A Twisted Tale has probably been one of the two favorites from our Kansas study.  The kids love reading about the animals getting all mixed up, and imagining what would happen.

Now, if I still had this toy, it’d be perfect to follow up on this book, but it went the way of the Dodo in our house because the kids had outgrown it.

But, I don’t.  Instead I just sat there thinking about how much fun that would be.  Or any of the other fun mix up the animal toys which we don’t have.

So, I turned to an old standby………  index cards!  And I challenged the kids to think of a funny way to combine two animals.

So I got a dog and a cat that are connected to each other’s bottoms.  Superman was oh so proud of that.  Me, not so much.

A person with really long legs.

Two ducks drawn by Batman that have feet from different animals.

While, I’m not a fan of the whole connected by their bottoms, I did think Superman’s drawing was somewhat original.

I better get thinking how I’m going to top this for another state.  Actually we’re starting over because we’re going to start doing this with some other families.  Which gives me a chance to decide how to make these studies work better.

A cute story about a woman who takes in a lot of kids and how they live, and what it was like for them to live through a twister, and what happened to their house.

Now for the project. 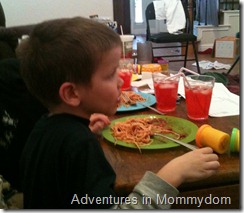 First, make spaghetti for lunch.  At some point I will write down a recipe for this, but sufficive to say the recipe involves lots of oregano, basil, and garlic.  And it’s yummy.  If  I could I would eat it 5 times a week.  Jeff objects to that, so I don’t.

Save some of those noodles for your art. 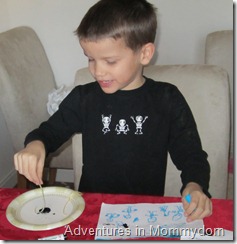 After they’ve completed this give them a spaghetti noodle and some black paint.  They’re going to drag the noodle all over the picture to make a twister. 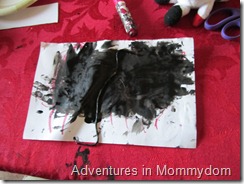 Here’s their finished results.  It wasn’t the spectacularly amazing picture I was thinking it would be.  I saw another blog post recently where they did it and theirs turned out much better.

Here’s what I think I did wrong:

2.  I think they watered their paint down a little.

I’m not sure.  Anyone else done something like this?  What worked for you?

All right, now head on over to Debbie over at Children Grow, Children Explore, Children Learn for more geography and history, and over to A Mommy’s Adventures for more art projects.

Now to go solve a fighting problem for some rather tired kiddos.

I think I mentioned some of these last week, but here’s the majority of our Kansas books.

The biggest hits have been:

Twisted Tale– no picture of the cover, but it’s a super cute book about a family that goes through a tornado and how they have to solve the problem of their twisted up animals.

That Dancin’ Dolly- Which seems so cute, but it didn’t quite work right, aside from the kids asking me to sing it as a song, because it’s a song, so I tried my best to sight read the music….. kinda

Gramda Essie’s Covered Wagon– not on the carousel, but it was a little long for their concentration, and it was more of a journey type of book, no real action for the boys.  I might try them on it again in a few years.  It’s an interesting story about a little girl and how she remembers all of her moving back and forth and how much she had a hard time with that.  I think that’s the other problem, it’s totally out of their frame of reference.

Well, that’s a quick overview.  I’m off to take a walk with the kids, and then maybe when I get back write the rest of my posts for the week.  That or go upstairs and work on some more painting.  We’ll see.

Now head on over to Mouse Grows, Mouse Learns to see what else people are reading this week.

Everyone who guessed Kansas was of course right.  And we couldn’t just “do math,” as my kids would say, with sunflowers.  We had to paint with them and more.

I found this super cool site with some sunflower ideas, and used their sunflower life cycle page as part of our Kansas study after reading.  First we read about how they grew from this book.  I have to say this is my favorite book about plants so far because it had great pictures, and did a great explanation.

The books we used……

Then I made this recipe from Pocketful of Posies, and she’s right it makes A LOT.  So, now I have a whole tub full of finger paint waiting to be turned into different colors.

At first I was very strict on the whole you must paint a sunflower.  That was their first index card (and let me just say I’m loving this whole index card art, it’s a great size for displaying and keeping in lapbooks and such, and it’s not overwhelming for when they don’t feel like painting).

After the first one they just had at it, and I added in a few more colors.  I’m looking forward to when we try this again.

Now head on over to:

Our math lesson for this week was tally marks, and I knew that if I made them do it using the text book they’d get all freaked out, so instead we just did it using our homemade dry erase boards and using all sorts of things to count.

And then we read some books on sunflowers and I had a brilliant idea.  Ages ago I made a seed sorting kit for the kiddos, and so I ran upstairs and unearthed it.

Then, I gave each kid a small pot and had them sort out the sunflower seeds and count how many they had using tally marks.

After we’d practiced with just the sunflower seeds all week, on the final day they had to count up how many total with tally marks for each group.  That was quite a challenge, but it made an otherwise boring subject fun.

This was also part of our newest state study, let’s see if anyone can guess what state……..

Now head on over to Joyful Learner to see some more fun math ideas and later this week The Nurture Store is hosting a math playing thing.