And, the main character was a little boy who joined up because his brothers were doing it and he’s worried about his brothers.
We read this with our geography group, and afterwards all the kids got some figures from &amp;lt;a href=”http://www.juniorgeneral.org/index.html&#8221; target=”_blank”&amp;gt;Junior General&amp;lt;/a&amp;gt; and went to the &amp;lt;a href=”http://www.juniorgeneral.org/load.php?Period=5##&#8221; target=”_blank”&amp;gt;Civil War category&amp;lt;/a&amp;gt;.&amp;amp;nbsp; There I printed off several different groupings for both the Confederate and Union soldiers.&amp;amp;nbsp; And then I noticed there were the actual generals for this battle, and got all these grand plans.
So, blogger is deleting half of my post.  It looks like it’s showing up in Google Reader, but not on my blog itself, that makes no sense……  Sigh.  Now, to try copying it in.  It’s one of those days.

It just won’t admit it’s there, now to rewrite it.

Try 3 or 55 or so.  It’s one of those days.  I may have solved the whole blogger not recognizing my post is there thing, maybe. 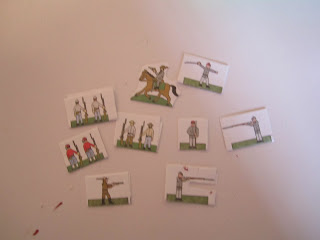 Then we looked at the confederate soldiers.  That’s them in the picture, and we talked about their uniforms, which if Livewriter had worked properly would be all nicely cropped……

See, the Confederate army didn’t have all of it’s soldiers in one uniform.  There were uniforms by state, by different groups, and an official uniform.  So we talked about how hard it might be to know if the person coming at you was a friend or a foe.

And then all of the boys started their little guys shooting, and I figured that was enough for one day.

And on a totally unrelated note, have you ever notice where you have weeks and days where nothing is happening, and then you have a day where it all happens at once, and you can’t keep up with it all?

7 thoughts on “Geography/History: Battle of Gettysburg”